Medusa: The Curse of Athena

Medusa: The Curse of Athena is a slot by PG Soft that revolves around how Medusa came to be. The game has multiple features and a 206,250-coin jackpot.

How's this game? (65 votes)
SHARE THIS GAME
PLAY FOR REAL

Medusa: The Curse of Athena: A Fantastic Greek Mythology-Themed Slot

Medusa is a well-known monster in Greek mythology with her head full of snakes and power to turn anyone into stone just by means of eye contact. But before many feared her, she was a guardian of the temple of the goddess Athena. However, Poseidon, the deity’s foe, molested Medusa on the steps of the goddess’ temple. As a result, Athena was furious and blamed Medusa for what happened. The deity ended up cursing Medusa to become what she is known as today.

PG Soft created a slot called Medusa: The Curse of Athena, also known as Medusa I, that follows the story of the cursed creature. This title is the predecessor of Medusa II: The Quest of Perseus by the same provider as well. You can even play this game on the go as it is mobile device compatible. Continue reading this review to know more of what else this Greek mythology-themed slot has to offer.

Medusa I features a great design that is not common among slots. You will notice that the game screen has a top and bottom section. The top shows the different animations including a non-cursed Medusa laying down and looking at you, while the bottom section holds the title’s reels. 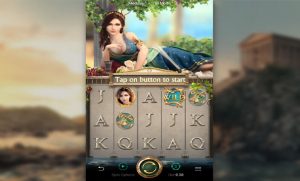 The game has 3D graphics which makes its animations lively and eye-catching. Some of these include Medusa looking down at the reels whenever you land a combo. This will entice you to keep on playing because of your anticipation that more visuals will be coming your way.

The setting of the slot is in Athena’s temple with a bright and colorful background. You will notice that there are also vines wrapped around the pillars that stand behind Medusa. High-paying symbols that grace the reels include Medusa, Poseidon, Wooden Lyre, and Golden Snakes. There are Wilds, Scatters, and typical card icons as well.

You will feel relieved when you hear Medusa I’s sounds as it features peaceful orchestra-like background music. There are also chirping birds and the sound of waves crashing on the seashore as you play the title. The sounds definitely complement the engaging design of the slot along with its fantastic 3D animations. 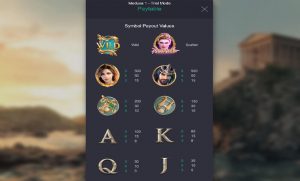 The PG Soft slot sports a 5×3 grid with 30 fixed paylines running across it. The game counts your winning combos from left to right only. You can set your bets anywhere from 0.30 up to 375 coins. Also, the RTP of this title is 95.29%

You can play Medusa I hands free as it has an Auto Spin option. This lets you spin the reels automatically up to 100 times continually. Also, you can set the game’s Spin Speed setting at Turbo to make each spin quicker if you prefer a faster betting session.

You can expect Medusa I to have multiple special features like Wilds, Mini Reels feature, and free spins. Know more about these bonuses below.

You have more chances of winning with the game’s Wilds that substitute for all symbols except Scatters. These Wilds appear on reels 2, 3, and 4 only.

While you are playing the game, three mini reels will pop up on top of the slot randomly. Medusa and Poseidon characters spin around these reels.

If you get three Medusa characters after the mini reels’ spin, Medusa will blow a kiss at the reels. This will cause three to five random symbols on the reels to turn into Medusa, granting you a chance to form combos.

On the other hand, landing three Poseidon characters after at the end of the spin of the mini reels will cause Poseidon to appear. He will then throw waves at the reels to turn two to three reels into either A, J, Q, or K symbols, giving you a sure win for the round. 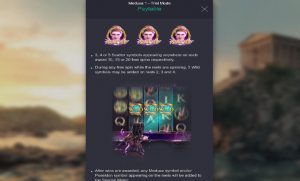 You can win free spins while playing Medusa I. You can get 10, 15, or 20 free spins if you land three, four, or five Scatters on the reels, respectively.

During the bonus feature, a special meter will appear on top of the reels. This meter fills up whenever you get a Medusa or Poseidon on the reels after each free spin. Getting a certain amount of Medusa and Poseidon symbols rewards you with a coin win prize. The following are the different coin wins you can get:

Other than the abovementioned features, you have a chance of winning Medusa I’s jackpot of 206,250 through all these bonuses. If you are looking for a Gamble option, this title does not have any.

Other Slots by PG Soft 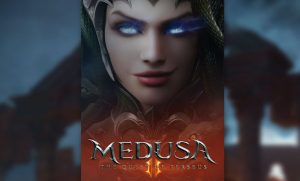 Medusa II: The Quest of Perseus

Should You Play Medusa: The Curse of Athena?

The story of how Medusa became a feared creature in Greek mythology is fascinating. But seeing this myth put into Medusa: The Curse of Athena slot by PG Soft is just fantastic. The game’s 3D design and relaxing sounds complement its Greek mythology inspiration.

Also, the PG Soft slot has a straightforward gameplay that is easy to grasp whether you are an experienced player or a newbie to slots. Plus, its bet range is ideal whether you prefer setting your stakes low or going all out. The game’s bonus features are something you will look forward to as well because you can win high amounts through them.

All in all, Medusa: The Curse of Athena is a fantastic Bitcoin slot that captures the mythological creature’s story while at the same time gives you the chance to win big amounts as you play.