Magnificent 8 is a 5x3 slot that will take you to Asia where random cash prizes can be found. Test your luck by trying out this slot with free game credits.

Magnificent 8 is an Asian-themed slot that displays Chinese symbols on the 5×3 playing grid. The title refers to the game’s eight symbols. Unfortunately, the only feature you can look forward to in this online slot is its signature Magnificent 8 Bonus feature.  The video slot bears good fortune with its Chinese symbols and fun bonuses that will reward you with random cash prizes. Find out how you can get lucky in Magnificent 8 slot by reading this review. 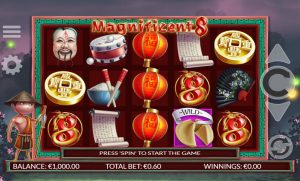 The symbols that appear on the reels feature icons you associate with Asian culture like the Chinese Coin, Laughing Buddha, Hand Fan, Little Teapot, Classic Scroll, Asian Drums, Bowl of Rice with Chopsticks, and Red Lantern. The graphics are not the game’s highest points as all of the icons seem too big and random. Plus, the fisherman at the side of the reel looks irrelevant and lost.

There are also extra symbols to help you with the game like the Gold Dragon 8 symbol that represents the Magnificent 8 Bonus and Fortune Cookie symbol that functions as Wild. Both of the symbols are associated with Chinese luck, so you can thank these icons when you have reached prosperity.

On the other hand, the music of the base game is traditional and oriental, making you feel like walking along the streets of Ancient China. When the Magnificent 8 Bonus hits, you will hear an upbeat song reminiscent of Chinese festivities. 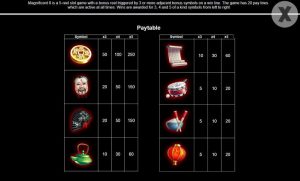 Magnificent 8 slot is a 5×3 reel with 20 paylines.  You can adjust your total bet amount from 0.20 to 100, one reason the game is friendly to all types of players, whether a beginner or a long-time player.

The Auto Play setting gives you three options to make your gaming convenient. One is setting a number of automated spins which ranges from five to 100. Two is you can set when you want the Auto Play function to stop. And lastly, the Loss Limit setting will stop the automatic spins when your bankroll goes down from 2 times up to 100 times your total bet. Plus, you can toggle the Single Win Limit which stops the function when a single spin payout ranges from 10 times to 500 times your total bet. 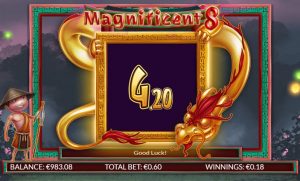 The sole feature of the game is the Magnificent 8 Bonus. You can trigger this feature by matching at least three or more Magnificent 8 or Wild symbols. This icon is depicted by a gold snake dragon which is wrapped around the number eight. Once activated, a cash reel appears to give you a random prize.

What makes the Magnificent 8 Bonus feature stand out is it can be triggered multiple times in one spin. If you match the Bonus symbol on two paylines, you can make the cash reel appear twice in a single spin. In addition, you earn bigger cash prizes when you activate the feature more than once. While other Bitcoin slot bonus features may involve a cash reel system, these features activate only once per spin.

Should You Play Magnificent 8?

The main reason you would want to play this game is the Magnificent 8 Bonus. Very few Bitcoin slot machine games will let you trigger a special feature multiple times in a single spin. It is also incredible that you can match the Bonus symbol with the Wild symbol for an extra spin with a big prize. This is not common in most video slots.

However, there are a lot of Asian-themed games out on the market. Magnificent 8 slot has no distinguishable feature that sets it apart from other slots. Yet overall, if you like triggering multiple features in one spin, Magnificent 8 slot is worth playing. You can find the slot among any of the partner Bitcoin slot sites of Betdigital.